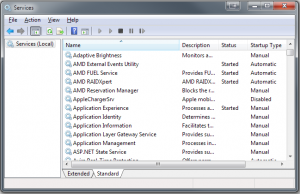 At random times, especially after a long computer uptime (over 2 weeks), all windows animations and especially any Flash-based video player would become sluggish and render at about 10-15FPS. This happens independent of where using the computer or letting it idle while it is running.

This has happened to me with over a year’s worth of different Catalyst driver editions, on several different video cards but on the same install of Windows 7.

After looking a long time for a solution (with none other than a restart solving this at first), I eventually figured out that restarting certain services would solve this (at least until the next time the issue starts manifesting itself again).

The procedure is simple: using Windows’ Services Manager, stop, restart and start a particular group of services in a particular order:

In case you’re not comfortable with playing around in the Services manager or are just too lazy for so many clicks, saving the lines below into a repair.bat and executing that batch file would accomplish the same thing:

Your screen will flicker while Windows returns to the classic theme then re-activates the aero theme.

The procedure can be repeated as many times as the issue re-occurs.