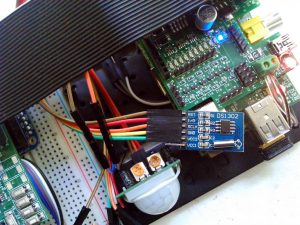 I’ve got a “DS1302 Serial Real Time Clock with Battery” very cheap off eBay (for under 2$) which I’ve set up as a backup Real Time clock module on my Raspberry.

Hooking it up is pretty straightforward. You’ll need power (3V), ground and 3 GPIO pins (which are hard-coded in the C++ program and rather difficult to change).

The pinout is detailed below: 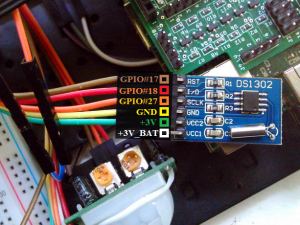 Edit: This code and tutorial were written at a time when only one edition of Raspberry Pi (the 1) was out there. For the newer Pi-es which added extra GPIO pins and rearranged some of the existing ones, the code may required adjusting to address the correct pins, as mentioned in the comments below.

Then you can run

to set the time and

A RTC module would be useless on the PI without using it to retrieve the right clock at the right time. And the PI needs a clock the most at boot.

The simplest method would be to edit /etc/rc.local and add a call to the compiled rtc-pi binary.

For this, create a new file (let’s call it savetime) in /etc/init.d with the following content:

Then symlink this file in /etc/rc0.d

rc0.d is the folder for scripts called at runlevel 0 (shutdown/restart)