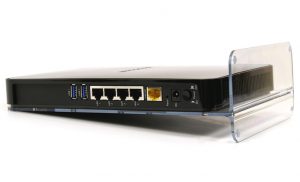 The Negear WNDR4500v2 router is quite a beefy piece of hardware, boasting 128MB of RAM and 128MB of flash. It also has a 4-port Gigabit switch and Gigabit WAN, plus dual-band (2.4GHz and 5GHz) wireless, for up to 900Mbps combined connectivity.

The original firmware is also quite extensive, including plenty of features even for a maniac user like me. I would most likely not have replaced it from day 1 however if it had one more feature that I absolutely needed: TFTP/PXE/BootP options for the DHCP server.

So, after using DD-WRT on the trusty old WRT54GL for almost 4 years (which although still works like a charm no longer handles my connection speed), I decided to jump right back to DD-WRT (as I had most of the stuff already configured and migration should have been very smooth).

After reading various topics and posts about the best DDWRT firmware edition to use on my new Netgear WNDR4500v2, I flashed the latest (at the time) K3-AC flavour of the DD-WRT firmware:

However, I pretty quickly found at that although rock-stable (for the 2-3 days I used it), this edition lacks the Samba/FTP functionality I desired.

So I switched to the main-branch (nicknamed brainslayer) DD-WRT, particularly:

Usb support is enabled from Services > USB. Printer support is only needed if you plan to connect a printer and share it to the network.

I will be using a 32GB stick formatted in 3 partitions:

The first two partitions on the stick will be automatically mounted by DDWRT based on their labels, as seen here.

FTP and Samba are both configurable via the WebGUI, in Services > NAS. The options are pretty much self-explanatory. 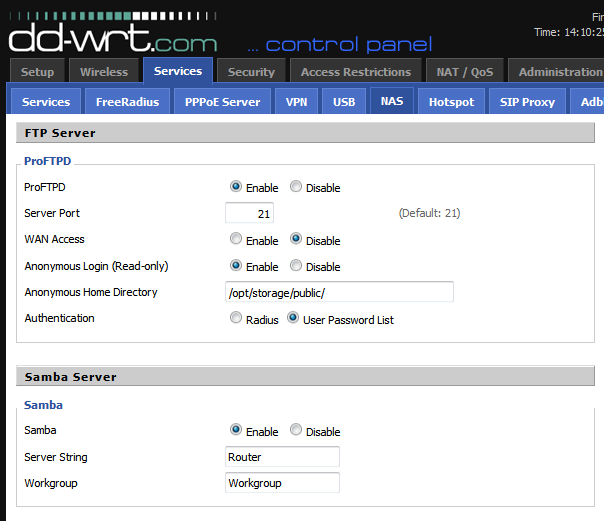 Original Optware and OTRW2 do not work with K3.x based firmwares. BasMaf forked a compatible branch which he named DD-Ware:

I successfully installed DD-Ware using the install script at

then installed my wanted packages using

If the installed packages are no longer found after a reboot, add this

to the startup script.

DD-Ware is needed for additional tools (like htop) and the later-used TFTP server.

The DHCP Server needs to be configured to send necessary PXE/network boot information to network clients.

This information will be provided at a later time as a tutorial of its own.

TFTP package is tftpd-hpa (available only via DD-Ware), and it can be started with

No other configuration is necessary. You can replace the sda3/storage/boot part with the actual path of the folder holding your TFTP structure. Add that line to DDWRT’s startup script so TFTP is immediately available after boot.

The router, having 2 USB ports, can also be sued to share a printer to the network so it is available to all computers at all times.

Out of the above output we figure out the printer port should be /dev/usb/lp0. Since this system file is no longer created automatically since kernel 2.6, we create it manually with

After this, reboot the router. After the reboot, check that p910n (the print server) is running and sharing your printer:

All that’s left is to install the printer on your client machine. Remember it can be found on the IP of your router, port 9100 and type RAW.

In the first days of testing (as an AP only) I noticed random lag issues and reboots. Monitoring it with htop while the issues occurred the cpu usage would go up to 100% for a couple of minutes (kernel time) before rebooting. At one time the resetbutton process was using the CPU 100%.

So I went through the settings and disabled all services that I don’t need at this very moment: SNMP, VPN (which I plan to re-activate at a later point), and UPnP. After this the random reboots (and spikes in CPU usage) went away. I still get random spikes in lag (from 1ms to 300-500ms of lag while pinging the router via wireless), but these spikes last a couple of minutes and then things return to normal (I have several devices connected via wireless at that particular moments, so it’s difficult to debug).

More conclusions after one month of use

I have later re-enabled SNMP (for monitoring with Munin) without adverse results. I also managed to pinpointed the source of wireless interferences to my wireless headphones (which apparently use the same 2.4Ghz band). The WNDR4500v2 is now my main router and handles all my network traffic for up to 5 PCs at once plus about 4 phones and 3 laptops via wireless simultaneously without hiccups.

The wireless issues due to the headphones still occur, but I figured out the are very position-dependent; moving around the room (or simply moving the router around) reduced them to about 5-10 seconds of lag every 30-60 minutes while the headphones are actually in use.

Sometime Samba forgets to start after a reboot. Adding the following commands to the startup script should take care of it:

One thing I noticed is the WNDR4500v2 with DD-WRT has quite a long boot time (over a minute and a half) so do be patient when you’re rebooting it (don’t freak out that you bricked it). The original Netgear firmware was quite a lot faster.

The following DDWRT revisions are personally tested and worked on my WNDR4500v2 at various times: