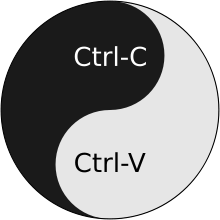 In the beginning, the world was a stinking mess of ammonia, methane gas, and nasty toxic chemicals. The atmosphere was alight with flashes of pure energy. Something wanted to be born.

In ways and for reasons that remain to be explored, the ribosomes appeared, who could copy. This was the beginning of Life. We therefore see Copying as the first manifestation of the Divine Spirit.

Once the ribosomes were there, and could copy both themselves and the proteins necessary to build a cell, this led to cells actually appearing. Exactly why the proteins chose to voluntarily organize into something more complicated is, as we said, not yet fully explored, so we’ll have reason to return to this. But we leave that aside for the moment.

The important thing is that the cells appeared. Cells have two properties. First, they can copy themselves, just like the ribosomes before them. Second, they like to cooperate with others to build things that are larger than any of the constituent parts.

From these two properties, the living world that we see around us developed. The peacock and the parsley, the forest and the shoal of fish, all other living phenomena ever filmed by the BBC.

We Kopimists therefore see Copying as the First Fundamental Principle of the Creation.

We see the Desire to Build Something Larger Together as the Second Fundamental Principle, and call it Cooperation.

From this foundation, we want to learn to understand the Divine Spirit and the world we live in. And we want to do it together with others.

In the creation myth, we see how Copying and Cooperation led to the emergence of life. These two Fundamental Principles have then played a central role in the history of mankind.

Fire
Once fire exists, it doesn’t cost anything to copy it. ”He who lights his taper at mine, receives light without darkening me,” cave people noted several millennia before Jefferson turned it into a quotation.

Language
A child learns her first words by copying her parents, just like they once did with theirs. The language belongs to all and none, and that is what gives it value. The more a language is shared, the more valuable it becomes for those who share it.

By listening and copying, early men and women created what is still today our most important tool in society. Language is the basis for our ability to build larger things together, from individual projects to entire civilizations. There are other forms of communication that are also important, but to us humans, language is in a league of its own.

Culture
Once they had access to fire and language, the first thing that people did was to sit down around the fire and start telling each other stories.

Perhaps the prehistoric inventor of the word ”tiger” had in mind that it would primarily be used when there were actual tigers around, but this is not what happened. Instead, stories and songs were filled with thousands of tigers that had never existed in the real world, but lived terrifying and beautiful in people’s imagination.

Writing
The human brain has clear and present limitations on how much it can remember and retell. Writing was the next milestone that allowed us to transcend these limitations.

With writing you can share more complex thoughts with more people at a lower cost. You can create more complex structures that involve more individuals. The amount of information that can be stored is no longer limited to what an individual can recall.

Writing made it possible to copy and share information like never before. It allowed civilizations to rise and create the conditions for further progress.

The Printing Press
When Gutenberg put his printing press together, just before the beginning of the 16th century, it was the starting bell for the development process that would give us the modern world we have today.

The printing press drastically lowered the cost of sharing information. Within a few decades, the technology had spread like wildfire all over Europe. Never before had so much information and so many new thoughts flowed through people’s minds.

Ever since, the printed word has been at the service of knowledge, culture, and political freedom. The individual pen has not always been mightier than the sword, but in the long run free speech has turned out to be a natural force that no regime in the world can stop.

Science
Isaac Newton will stand as the symbol for the new scientific paradigm that was born some century after the printing press appeared.

One novelty was the scientific approach, where you make observations and experiments, and then try to build theories based on the results you have. But an even more fundamental shift was that scientists started to publish their ideas and discoveries, so that they could be shared. Until this day, the printing press has been the most important instrument within all scientific disciplines.

The alchemists kept their results secret, and got nowhere at all in several thousand years. The chemists published theirs, and transformed the world in a century.

Since the days of Isaac Newton, scientists have been able to see ever further by standing on an increasingly high pyramid of giant’s shoulders. Copying and sharing of knowledge have given us the technological world we have today.

The Internet
Today we don’t yet know what will become of the Internet, but we have seen enough to realize that it will be something really big. Just like Writing and the Printing Press when they appeared, the Internet represents a quantum leap in our ability to copy information and build bigger things together.

Where it will lead to in the end nobody knows, but we Kopimists feel trust in the future. Throughout history, we have seen how the two fundamental principles Copying and Cooperation have combined to bring humanity to where it is today.

We are eager to continue to take part in the process that started the first time a man or a woman in a cave shared a flame of fire, and got a smile in return.